In part one of our case study on Crestron and Planar video display walls we discussed the benefits they can bring to a busy financial office, as well as the challenges and aspects that go into constructing such a complicated installation. Today we will be looking at a specific example of a video wall we constructed for a client’s luxury office, the challenges we encountered and the unique features we programmed for them.

Our client’s Miami Beach based financial office was looking for a video wall solution for a variety of reasons. Having already been contracted to set up automation and access control systems throughout their luxury office, we began the consultation and design for a 2×2 video wall as a main feature of the open office layout. Fast forward a few weeks and the construction of this video wall is complete, however upon seeing the finished product our client decides they needs a larger wall to fully complete their vision for the office..

A sudden change like this would stymie even an experienced crew of integration professionals, but the #DoneRightNotEasy crew was up to the task. We quickly mocked up a 4×4 solution on the same wall using Photoshop to get near instant approval from the client, allowing us to move forward right away. We then proceeded to move the 2×2 display around the corner to a perpendicular wall. This was no small feat, as it required a full infrastructure change on both the front and back end of the system; everything from new cabling, new mounting hardware, new everything. Power requirements and rack set up even had to be recalculated to ensure both displays would work at full capacity every time they were needed.

Once both walls were up and in place, it was time to begin the unique programming used to meet our client’s needs. As we discussed, when utilizing a four by four video wall you gain 16 screens of real estate to work with, and your options are vast. In the case of our client, they chose to divide this up into four primary quadrants, split between two news channels, a fully matrixed video conferencing system powered by ClearOne, and an interactive video shot of the entire secondary office located in New Jersey. These were not static displays, as users have the ability to drive and change the interface around depending on current needs. There is a drag and drop feature which allows a user to grab content from the top and release it instantly causing it to appear on the screen. This can be manipulated directly from custom built desktop panels, which also have the power to isolate audio from any source on the screen. Utilising a Crestron digital graphics engine, the display wall also had the ability to overlay images on top of the normal display, which would prove instrumental to the custom video conferencing platform we put together.

The video conferencing system connected to the video display and automation system is a thing of beauty. Every desk in the office is equipped with a microphone giving them a real real time connection to the New Jersey office. Due to the sensitive nature of work in the financial field, we wrote and installed special Crestron programming that allowed the tabletop microphones to be muted quickly, either at large or on an individual basis. This feature is illustrated on the video wall itself, as on the bottom right screen there is a graphical overlay of the desk layout featuring a color indicator showing which microphones are muted or active at any given time. This was not an out of the box feature, and required a back and forth conversation between the Crestron system, Planar monitors and Video conferencing software. Just another fully custom solution designed and programmed by GMI to ensure the needs of the end user are met beyond their wildest dreams.

In the end our client was over the moon about the power, utility and beauty of their Crestron powered Planar video display wall. The flexibility to change content, ability to pre-program based on user, and the real time connectivity of the video conferencing system would prove instrumental to their operations right away. 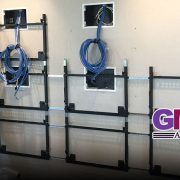 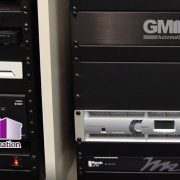 Looking at the Bigger Picture – Vendor Relationships
Scroll to top